On October 31, 1999, I like many other Cart World Series fans were watching on TV the final race of the season, the Marlboro 500 at the Auto Club Speedway (then California Speedway), Fontana, California. 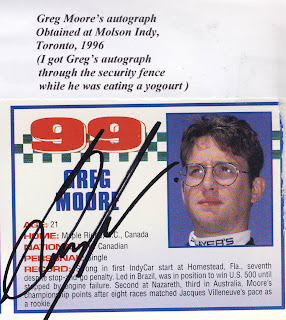 On the 10th lap, in the exit of corner two, Greg Moore's #99 Players-Forsythe went out of control, spun on the grass and hit upside down, at 200 mph, the infield retaining wall. It was a horrifying crash and I knew that he could not survive. 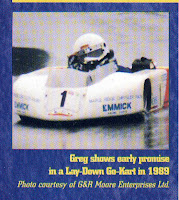 His early racing career progressed through go-karts, winning the North American Enduro Kart Championship in 1989 and 1990. He also played ice hockey. Moore had started racing go-karts at age 10, and he was No. 99 on the regisration list in his first year at the go-karting club and would continue to use that number for all of his future racers. 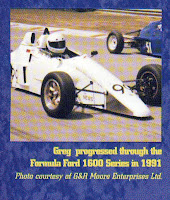 In 1991, moving up to Formula Ford, Greg was named the Esso Protec Formula Ford 1600 Rookie of the year after winning one race and placing fourth in the championship.


In 1992, Greg won four races and took four pole positions. He was the USAC Formula 2000 West Champion and Rookie of the year.

At the age 18, Greg became the youngest driver ever to win a Cart-santioned race when he won the 1994 Indy Lights season opener at Phoenix. He won three races in 1994 and finished third in the championship.

Greg joined Player's Forsythe racing team and won the 1995 Indy Lights Championship with a spectacular record-setting season that saw him win 10 of 12 races, including five in a row. 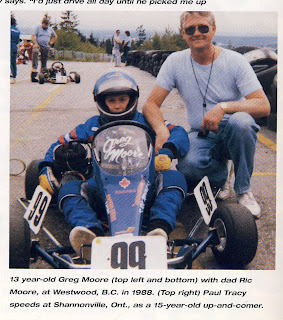 Moore was only 20 when picked to replace Indy Car champion Jacques Villeneuve as the driver for Player's Forsythe racing team.

His rookie season included a second-place at Nazareth, third at Cleveland and a fourth at Toronto. Greg finished 9th overall in the championshipwith 84 points and was runner-up to Alex Zanardi for the Jim Truman Rookie of the year award. 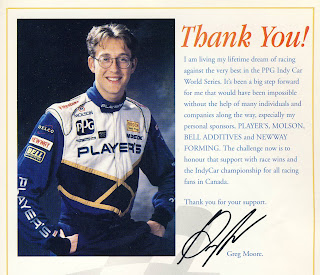 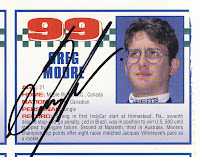 I was at the Toronto race and obtained Greg's autograph through the barrier fence while he was eating a vogart.

At the 7th race of the season, Greg became the youngest driver in Indycar racing history, at the time, to win a race when he scored his first CART victory in June 1997 at the age of 22.

Seven days later, Greg scored his 2nd career victory in an exciting and dramatic race at Detroit, when both cars of Pac West Racing team, Mark Blundell and Mauricio Gugelmin ran out of fuel and Greg passed them for the win.

Greg finished 7th in the Championship with 111 points. 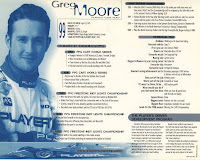 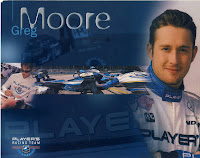 For the first time Greg had a teammate, fellow Canadian Patrick Carpentier to start the season. He finished in the top 5's in the first 4 races. The 5th race of the season at Rio de Janeiro, Greg diced and raced hard against Alex Zanardi, before a dramatic outside pass sealed the win. 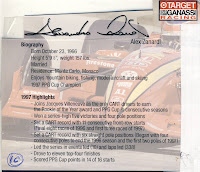 Later in the season, at Michigan he passed Zanardi and Jimmy Vasser on the last lap to win the US 500 and the Vandebilt Cup. Greg finished the year fifth overall with 141 points

This year Moore was invited by Mercsdes to attend their annual Stars and Cars festivities at their factory in Germany. Greg's international status had grown as he become known as the leading Mercedes driver.

The 1999 season started off very well for Greg, with a win at Homestead, his 5th career and final win in the Cart series.

As 1999 was the final year of  his contract with Players-Forsythe, Greg began to look at his options. In the summer of 1999 Greg announced that he had signed a contract to race in 2000 for one of the powerhouse teams, Penske Racing.

At the 1999 Toronto Molson Indy, in an interview, Greg stated "I've never gone {wow I can't believe this has happened to me}Sure it might have happened two or three years ago, but now the tough part, sometimes, you realize it's a job. On the other hand, I love doing it, I wouldn't give it up for thr world. It was my dream to one day be able to do this and here I am." 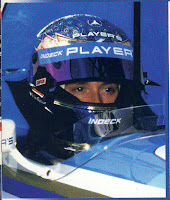 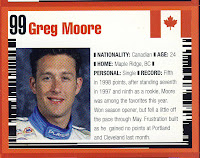 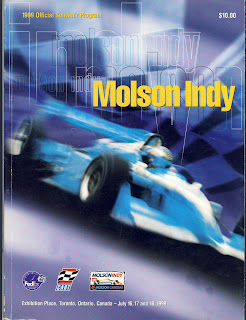 On October 31, 1999 was the final race of the CART FedEx Championship series season and Greg's final race with the Players-Forsythe racing team.

During the weekend before the race Greg was knocked off  his motor scooter by a paddock vehicle and injured his right hand. After a medical consultation and an in-car test, he was allowed to race.

On lap 10 coming out of turn 2 Greg lost control, spun into the infield grass at 200 mph and upside down hit the infield concrete wall. Moore suffered massive injuries and died at the scene.

Patrick Carpentier, Moore's team mate, was called into the pits and retired. None of the other drivers were aware of Greg's death until the end of the race.

Greg Moore was a well-liked driver by both racing fans and members of the CART racing community. A funeral service was held in Greg's hometown of Maple Ridge, British Columbia and was attended by 1500 people.

CART mandated a head and neck restrain system on ovals shortly afterward, with the rule eventually being mandatory on all tracks. The most common of these devices is the Hans device.

Moore's car number  99, was retired by CART as a mark of respect. The organization presents annually the Greg Moore Legacy Award. It is given every year to a driver who best typifies Moore's legacy of outstanding talent on the track, as well as displaying a dynamic personality with fans, media and within the CART community.

Greg Moore's mission was to be the best. He succeeded in more ways than one.

Greg Moore won over the fans wherever he raced, but his greatest admirers remain his fellow competitors. They remember him as a practical joker, a cellphone junkie, the social convener of the paddock motorhome community at any given race. He was the instigator of CART's brat pack with Dario Franchitti, Max Papis and Tony Kanaan.

He made things happen every day of the week - the inspired outside pass on CART's fastest ovals and had its parallels in normal life as well. When Dario Franchitti met Ashley Judd, it was because Moore had talked him into attending Jason Priestley's marriage party.

He may have been the youngest, but he also was the leader. 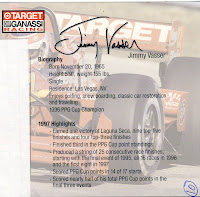 "My first win in my career was his first race (Homestead, 1996) and while I won that race, he smoked me on the outside."

"I was the first to give my congratulations when he won his first race at Milwaukee, in 1997. I parked right next to him and was genuinely happy for him."

"I never had a bad time with Greg Moore. We became good friends. He was a good kid, and I  enjoyed his company ."

If you look at champions like Ayrton Senna, who was Greg's idol and my idol, it looks like special people have a short life."

"God puts special people here for a little bit and then he takes them back and that's what I think happened."

"He always drove right on the edge, right at the limit, every single time he jumped in that car. A lot of people can't do that. That's something that made him who he was."

"Greg would have driven Formula One one day because that was part of his goals. He was very proud that he knew Mika Kakkinen and Ron Dennis. He was a winner inside."

"When in Italy, at Monza they opened the old oval track and we went in a car, and very carefully when around the 40-degree banking track. Greg said 'Here, they were racing' and you could see his passion for motorsport in his eyes."

"When we drove around the track, I'm sure he was figuring how he was going to drive the track in a Formula One car."

"Our friendship heightened our competitiveness. We always waved (when one passed another) on superspeedways. I think in '98 we passed back and forth 10 laps in a row and there was always a wave."

"Greg felt he was unbeatable on ovals, and I think he pretty much was. As a road-course driver I think he was sometimes let down by his equipment. But on the ovals this guy was mind-blowing. I wish I could do some of the things he did routinely."

"He was finally getting his chance, with the signing with Roger Penske for three years beginning in 2000."

"Before  negotiating the three-year deal, we talked about what were his interests in  going to Formula One or NASCAR"

"He saw how strong NASCAR was and he said it was a thing he'd like to do after he finished his CART career. Obviously he wanted first to win the CART Championship and the Indianapolis."

"He had these options with us that he might not have had with someone else. Greg was going to be a real resource for us in helping to get Penske Racing back to where it needed to be." 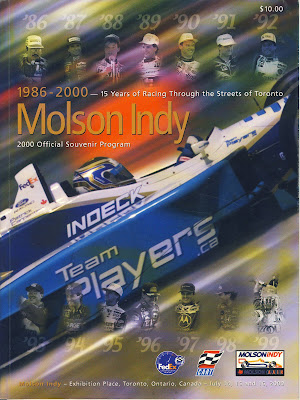 Steve Challis (engineer), Ric(father) and Greg
Greg worked on friendships in his life including 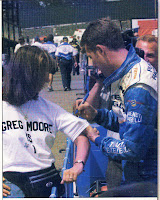 Greg always had time for his fans 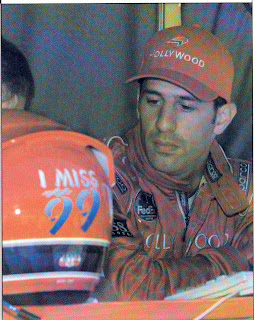 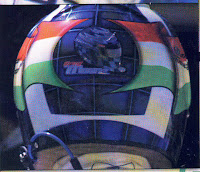 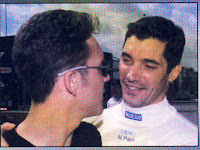 Greg and Max Papis
Video .. Greg Moore One More Tribute
I've viewed a lot of Greg's videos but my preference is this one. This past October 31, 2009 was the 10 year anniversary of the death of Indy Car's brightest star, Greg Moore. 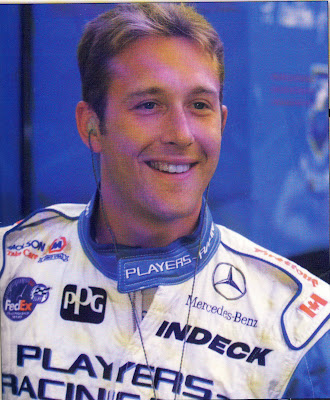